What would you ask Eddie Izzard?

There are funny men. And then there is Eddie Izzard.

Since coming to attention during the early 1990s, the British comedian and actor has drawn a devoted following worldwide with his unique brand of surreal rambling humor and cross-dressing.

[cnn-photo-caption image=http://i2.cdn.turner.com/cnn/2009/images/09/14/art.izzard.gi.jpg caption="Cross-dressing comedy legend Eddie Izzard is CNN’s Connector of the Day Tuesday."] Now based in Los Angeles, he is revered in comedy circles for his use of language and delivery. He has toured extensively around mainland Europe and elsewhere, often tailoring his material for local audiences in a manner unmatched by his peers: in Paris, for example, he has delivered his entire set in French.

In the U.S. he has come to TV viewers' attention for his series "The Riches," which he also co-wrote; on the big screen he has mustered an impressive list of credits, including "Valkyrie," "Ocean’s Twelve" and "Ocean's Thirteen."

Away from the stage, Izzard, a two-time Emmy Award winner, has spoken out in favor of pro-European politics and devoted himself to charity work.

On Tuesday, Izzard completed another amazing performance: completing 43 marathons (more than 1,100 miles) in 52 days in aid of charity Sports Relief.

Izzard will join CNN to talk about comedy, cross-dressing, politics, running - pretty much anything you choose to float his way.

Send your questions for Izzard below - and don't forget to tell us what makes you laugh.

Are celebrity adoptions a good thing? 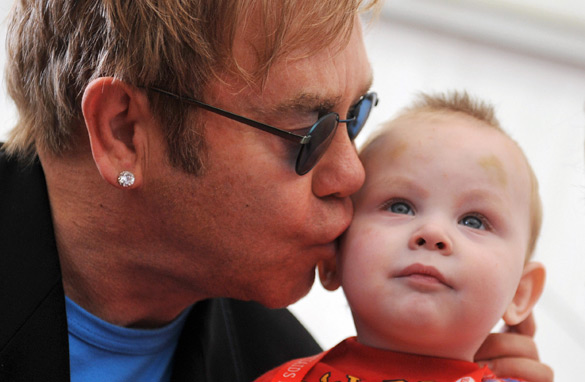 LONDON, England - Elton John’s comments during a visit to an orphanage for HIV-affected children in the Ukraine on his desire with partner David Furnish to adopt a child has thrown the issue of celebrity adoption back into the media spotlight.

The 62-year-old pop star did not say that he planned to pursue adoption; merely commenting after meeting one of the children, 14-month old Lev, that the couple would “love to adopt him.” (Read the full story)

While praising the singer for raising awareness to the plight of children with HIV/AIDS, the charity warned that “high-profile celebrity adoptions… may actually encourage vulnerable young mothers to abandon their children into homes hoping their child would be adopted by a rich foreigner and have a better life.”

Yet recent years have seen a backlash against celebrity adoptions - a trend sent up by comedian Sasha Baron-Cohen in his recent movie “Bruno” in which the gratuitously offensive Austrian fashionista adopts an African baby - notably against Madonna’s adoption of a young Malawian boy in 2006, and her continuing efforts to adopt a girl from the same country.

Are celebrity adoptions a good thing? Should children be taken out of orphanages and their home countries and subjected to the glare of publicity? Or is it right that celebrities should use their wealth and privilege to give a child a chance they would not otherwise have? Let us know your views below.