When you consider the victims in a war crimes trial, you don't normally consider the defendant first. [cnn-photo-caption image=http://i2.cdn.turner.com/cnn/2009/images/11/03/art.karadzic.afp.gi.jpg caption="How should the war crimes court handle Radovan Karadzic's trial?"]

But ex-Bosnian Serb leader Radovan Karadzic is trying to play that card in The Hague: he's trying to take control of the proceedings by portraying himself as a victim, denied justice by the West, and sinking under the weight of more than a million pieces of paperwork thrown at him by the prosecution.

I have heard western lawyers suggest that the best thing for everyone is for him to boycott the trial so the prosecution can make its case without further distraction.

But justice should be seen to be done and, vitally, all parties concerned - including Bosnian Muslims and Serbs - need to perceive the trial as fair. How does the court strike the right balance?

Connector of the Day – Muhammad Yunus

Muhammad Yunus received the Nobel Peace Prize in 2006 for his pioneering work in “microcredit” which has helped millions of people out of the poverty cycle.[cnn-photo-caption image=http://i2.cdn.turner.com/cnn/2009/images/11/03/art.yunus.afp.gi.jpg caption="Send your questions for Muhammad Yunus."]

The first businessman ever to receive such a high honor, Yunus has revolutionized conventional ways of banking, creating a system of lending small amounts to entrepreneurs with no collateral.

Recently he has backed the Nobel committee's controversial decision to award the 2009 peace prize to U.S. President Barack Obama.

Yunus set up the Grameen bank in Bangladesh in 1983 (Grameen literally means "of the village" in Bengali), and has since disbursed about $8 billion to Bangladeshi micro-entrepreneurs, 97 percent of whom are women in businesses such as street vending and farming.

The bank's concept is simple. “Credit is a basic human right”, says Yunus. “Offer even a small credit and a person will work out how to best use it to break free of poverty”.

The average loan is just $220, and repayments are near 100 percent. This "microcredit" model has been copied all over the developing world.

In 2009 during a global economic recession Grameen has been little affected according to Yunus. In fact it has now set its sights on helping the poverty-stricken in the U.S.

After the subprime mortgage meltdown and tougher standards by lenders, poor Americans deemed unworthy of credit by commercial banks now have somewhere to turn.

Yunus says the financial crisis offers an opportunity for businesses, banks and governements to revolutionize, and create a fairer economic system for the world's poor.

Send your questions for the banker with a conscience below, and we’ll do our best to put them to Muhammad Yunus, our Connector of the Day on Wednesday.

Time to think laterally, it's time for the Connect The World Six Degrees challenge. All you need to do is connect two personalities in six moves. 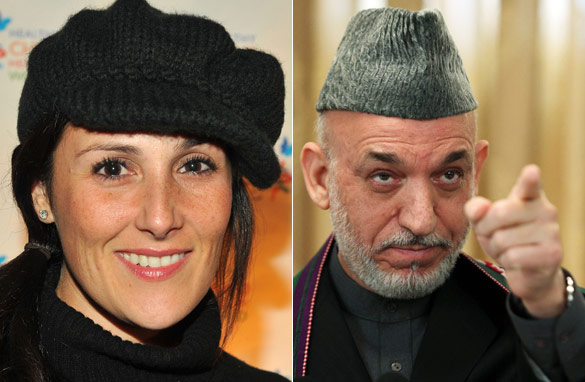 Leave your submissions in the comments section below, and the team will pick the most creative connection, and I'll announce the winner on Friday's show.

Remember: you need five other people between those two: no more, no less. If you want your friends to take the challenge as well, then click the “share post” button below. To see previous challenges, click here. Happy connecting!

RT @CNNConnect: Top Taliban leader Anas Haqqani told CNN's @NicRobertsonCNN The Taliban are not willing to compromise on the issue of #wome…
beckycnn

7:14 pm ET September 22, 2021 RETWEET
RT @CNNConnect: Until countries understand the important of #ClimateChange, countries and cities like #Vietnam , #Mumbai and others could g…
beckycnn