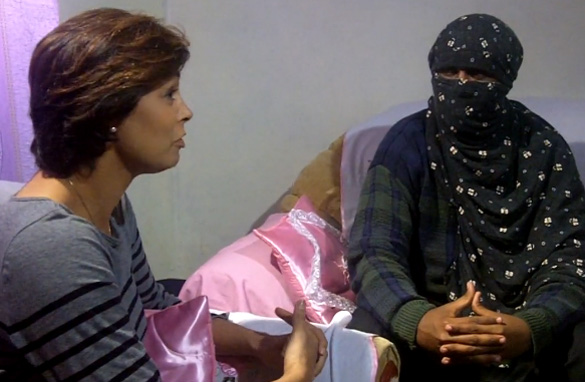 It took only about thirty minutes from my house in Nairobi to get to 'Little Mogadishu', where I met Gedi Mohammed Abdi.

The area's actually called Eastleigh but it's almost one hundred percent Somali - both Kenyan Somali or Somali refugees from across the border.

The action on the street is crazy with people selling wares, food, preaching, or just walking around.  Music blares from different corners.  The traffic on the roads are jam-packed.

There's no way we'd have been able to navigate the area ourselves so we met up with two fixers at a restaurant, who jumped in our crew car as we drove through an area called 'California'!

We finally stopped at a run down block of flats opposite a school ground and a couple of restaurants. The whole patch of grass was water-logged. It had been pouring.  Colourful clothes were flapping in the wind.

I went up about three flights of stairs and entered a small room with one sofa and two chairs.  The colourful curtains were drawn.  Gedi had wrapped his face up tightly in a black scarf, leaving only a narrow slit for his eyes.

He looked both intimidating and intriguing. I was excited because I had been working on this project in London for a couple of months and now here I was, interviewing a man who could give me first hand information about why he hijacked ships and crews for ransom and how he did it.  A translator sat next to him since we conducted the interview in Arabic.

Gedi criticised large trawlers that would come to the Somali shores and fish for their tuna, and slammed ships that dump toxic waste in their waters.

He says these were two reasons that initially galvanised Somalis to take action on the waters.

Gedi also told me in Somalia, there are only three career options for young men like him: either join the militias, join al shahbab (the US has identified this group as terrrorist) or become a pirate.

His uncle was a pirate and told him to come over to the coast.  Gedi told me he trained in a pirate boot camp that lasted a few months.  He learned how to swim, how to use weapons and how to get on board moving ships.

He was sent on the defensive skiff (there are usually two skiffs in an attack) in the first hijack he ever did (Oct 2009). So he was part of the look out and the support team on the waters.

Most Kenyans I spoke to believe that much of the new money Somalia have in Eastleigh is pirate money.

They buy things in cash - land, buildings, flats, everything,  I was told.

Gedi says there is an al Shahbab presence in Eastleigh too where there is terrorist recruitment going on.  He  pointed out to me too that pirates also give ransom money as protection fees, to al Shahbab in Somalia.  Eventually he wanted out.  "It was getting too dangerous" he says.

At the end of the hour-long interview. He took off his scarf and showed me his face.  It was a baby face.  I was surprised. I thought I'd see a rough, tough, weather-beaten, scarred one.  I did not.

He smiled at me,  and thanked me for listening to his story.  "What next for you Gedi", I asked?  He told me he was waiting to get a visa to Mexico and would they try cross over the border illegally into the U.S.

As part of a special series all week on Connect the World, CNN's Zain Verjee will be bringing us the untold stories of piracy off the coast of Africa. Each day she'll be writing a behind-the-scenes account of how she brought us the stories we'll bring you each night at 2100 GMT.

You can connect with Zain on her Facebook page by becoming a fan at www.facebook.com/zaincnn