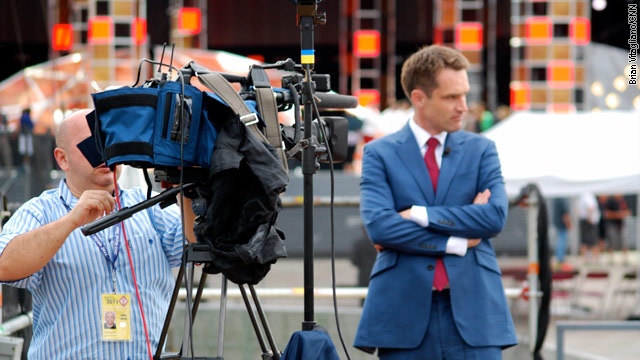 So many people have asked me what its like to field produce a 10 day Royal Tour for CNN?

To which I reply, exhausting, yet satisfying.

CNN compiled a small team of journalists to follow the newly married Duke and Duchess on their first official tour overseas. "Team Foster" as we are called in the planning notes consists of Max Foster, Royal Correspondent based in London, Sarmad Qaseera, Photojournalist and affectionately nicked named Buddha for his technical wizardry and me 13 year veteran of CNN's New York Bureau.

None of us has ever worked together in the slightest, let alone embark on a 10 day journey through Canada, taking us from Ottawa, Montreal, Quebec City, Prince Edward Island and Calgary.
Max and Sarmad continue the tour when the couple splash onto the Hollywood Scene after leaving Canada. I return home to my wife and dog and bed.

The planning started several weeks ahead with co-worker James Partington from our London bureau getting the ball rolling on travel. James was largely responsible for CNN's coverage of the Royal Wedding and had access to the Royal itinerary. Due to other commitments James was unable to go on this trip so they choose me, sorry James.

We all arrived in Ottawa a day before the Royal couple. Traveling with 14 cases of gear is never easy. Sarmad and I went to our location where we would be broadcasting from when the Prince and Catherine arrive in Ottawa. We were interested in making sure we were able to get a clean signal given our transmission capabilities. "Team Foster" made the decision to broadcast from one location each day of the tour instead of following the couple from place to place like many of the other 1300 accredited journalists where doing.

As a producer I'm responsible for making sure the team is on point both from a logistical perspective and an editorial one. From location to transmission to travel, to making sure no one goes mental, (including myself).

Some of the best well thought out plans mean nothing when variables beyond your control interfere. Given the length of the trip I won't go into detail about each day, but rather highlight some of our best and challenging moments from the tour so far.

¤ Meeting the Royal Highness's at an "off the record" media reception on Prince Edward Island. They seemed very engaged and truly happy to be on the tour.

¤ Contributing to our Royal Coverage, with an estimated 15 live shots and day for CNN and CNN international, editing packages, still images, blogs, and behind the scenes reports for CNNi show backstory.

With the good comes the well...

¤ Roughly 4-5 hours a sleep a night
¤ Lugging around 14 cases of gear through Canada Day on Parliament Hill, because our driver could not park close to us.
¤ Airline loosing 8 of 14 cases
then finding them.
¤ Hotel for our driver booked in wrong city on the busiest day in Montreal after working 18 hours.

As you can see the life of a producer on the road can be fun but also challenging.

Landing now in Calgary for rest of tour. Will check back in when its all over. So far I would say its been a success not only for the Duke and Duchess but for CNN as well.