Iraqi Foreign Minister Hoshyar Zebari tells CNN's Becky Anderson his country is fighting against the threat of global terrorism and that this is the biggest challenge it now faces.

An Iranian man convicted of murder was facing almost certain death. But seconds before his hanging was due to take place, he was offered a reprieve from the unlikeliest source. A photographer was on hand to capture the whole remarkable scene. He tells CNN's Connect the World with Becky Anderson exactly what he witnessed. 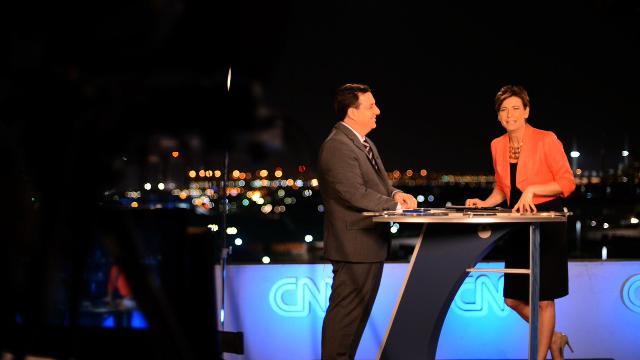 Afghanistan After the Election

The launch of Connect the World with Becky Anderson in Abu Dhabi came just a day after the people of Afghanistan defied Taliban threats and headed to the polls in their millions. Becky sat down with members of Dubai's Afghan community at a local cafe to find out whether they believe people power can ultimately defeat the militants.

'One Billion Rise' to end abuse of women

One in three women are raped or beaten in their lifetime. That equates to one billion of the women alive today.

After suffering abuse as a child, Eve Ensler became an activist. Two decades of activism culminated last year with One Billion Rising. It was "a global call for women and men across the planet to rise, and dance, and end violence against women and girls." And rise they did.

Eve told Becky, "what was really exciting I think is to see not only the breadth of the huge risings, massive risings in places like Philippines, and India, and Bangladesh, and at the Brandenburg Gate in Berlin for example, but to see these individual risings that happen, like with a girl in Tehran in her bedroom who filmed herself, in the streets of Somalia where women had never, in the history of Somalia, broken through and danced in the streets, in Lebanon. We saw people come out of the woodwork... It was a feminist tsunami."

Now a short film about the V-Day Rising has been selected to premier at the Sundance Film Festival, creating more awareness and more empowerment among women across the globe.

"I think there's an unearthing going on. The stories are finally coming out. What's been happening forever is finally getting told."